The Products Our New Sharon Carpenter Ant Extermination Team Uses Are Harmless To You, Your Loved Ones, And Your Pets, But They Are 100% Effective In Killing Carpenter Ants!

It is essential to begin removing carpenter ants from your New Sharon, Maine buildings as soon as you realize their presence. However, getting rid of carpenter ants can be complicated. You will need the help of an experienced licensed and insured New Sharon Carpenter Ant Extermination Control Operator, who can help you get rid of your carpenter ant infestation most effectively and efficiently possible.

When inside your home, carpenter ants will look for any accessible food to eat, such as candy, sugar, syrup, fruit, bits of meat, butter, grease, and pet food. So keep your countertops clean and food stored in containers, or you may be calling us for our New Sharon Carpenter Ant Extermination Service. 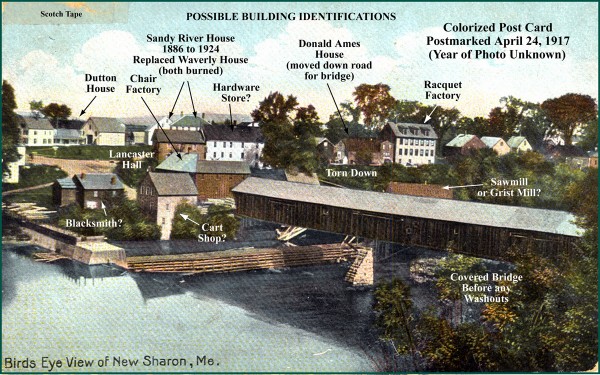 This card is part of the New Sharon historical society collection. The covered bridge was lost in a flood and an iron bridge was erected in 1917. This photo is courtesy of Spencer Thompson.

New Sharon, a town in Franklin County, Maine, was granted to the early settlers in 1791 by Massachusetts and incorporated in 1794. The Sandy River, a tributary of the Kennebec River, cuts through this rural community with a rich history.

In days far gone, New Sharon once had 21 school houses, six churches, three sawmills, and a gristmill, along with a chair, shoe, shovel-handle, carriage, and clothing factories. Today, there is an elementary school, three churches, a fire station, a post office, and numerous small businesses.

As an aside, Fred H. Hale, Sr., born in New Sharon on December 1, 1890, and died November 19, 2004, was at one time recognized as the oldest living man. Fred, a validated American supercentenarian, was, at the time of his death, 113 years old, 354 days. No one in Maine has lived as long as Fred, and he is one of the ten oldest men recorded in world history.

The location and setting of new Sharon are hard to beat, and every New Sharon Carpenter Ant Extermination pro always has their arms raised when there’s a carpenter ant job in that area. The Family business of Elliott Pest Control says, “Thank you, New Sharon.” for your ongoing support.